Do you have a WiFi router with external antenna connection? A well placed external WiFi router antenna is an option to extend the range of your WiFi network. We have tested and listed a wide range of WIFI router antennas. If you want to increase the range outdoors, choose a WiFi antenna outside. When choosing, pay attention to the frequency band that the router uses. A single band router only needs a 2.4 GHz WiFi antenna. For a dual band router, choose a dual band WiFi antenna that functions on both 2.4 and 5 GHz. 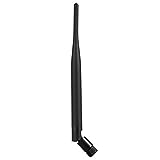 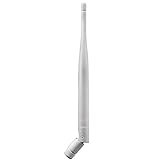 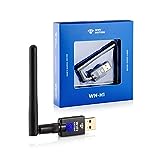 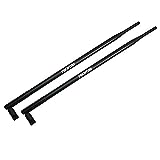 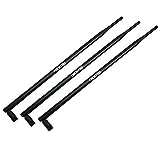 What is a WiFi antenna?

A Wi-Fi antenna is used on a Wi-Fi router to transmit the Wi-Fi radio signal. There are two types of WiFi routers: with built-in and with external antennas.

You can recognize an external variant as a black or white plastic stick that sticks out of the router. For optimal WiFi coverage, it is important that you raise it vertically. Many types have a hinge for this. When placing your WiFi router, it is important to ensure that there are as few obstacles as possible in the vicinity.

It is also preferable not to place a WiFi router on the ground, but at a height of approximately 1.5 to 2 meters. If this is not possible, use a separate WiFi antenna that can be connected to the router with a cable. You can also buy separate antenna stands for this purpose. If you want to hang a WiFi antenna outside, choose a special outdoor antenna. This is resistant to weather influences and therefore lasts a long time.

When choosing it is important to pay attention to the specifications of the WiFi antenna. The first important feature is the frequency band it is suitable for.

In the UK, two different frequency bands are used for Wi-Fi connections: the 2.4 GHz band and the 5 GHz band.

If you use a single band 2.4 GHz band wifi router, then a single band 2.4 GHz WiFi antenna is sufficient. Please note, this is only suitable for 2.4 GHz and will not provide enough signal on the 5 GHz for a reliable WiFi connection. If you use a dual band wifi router, choose a dual band wifi antenna, which is suitable for the 2.4 and 5 GHz band. A WiFi antenna equipped with an RP-SMA connector can be screwed directly onto the connection of a router. These have a hinge that allows you to put it vertically. With an antenna stand you can conveniently set up a WiFi antenna to improve the range of your WiFi network. If you have HR glass that shields the WiFi signal to the garden, you can improve the WiFi signal with an outdoor antenna.

The decibel scale is a logarithmic scale used to indicate gain. On the logarithmic dB scale, every 3 dB gain doubles the signal power.

To have a fixed reference that a WiFi antenna can be compared to, a reference antenna is needed. For this purpose an isotropic antenna is taken. This radiates the signal evenly in all directions.

This type only exists theoretically, but due to its spherical radiation pattern it is a handy standard to compare with any other type. Since this is the default, the gain is by definition one time, which equals 0 dB. Now we can compare every other WiFi receiver with the isotropic starter. For example, a WiFi antenna has a gain of twice that of the isotropic standard. This is a gain of 3 dBi. Because this is compared to the isotropic version, an “i” is added to dB.

What you need to know about Antenna GHz

Wifi is the name of a certificate for wireless data networks that function according to the international standard IEEE 802.11 (wireless ethernet or wireless LAN).

Radio frequencies in the 2.4GHz and / or 5.8GHz band are used. Typically, the term is written as “WiFi” and is synonymous with a wireless home network. The router of such a home network is not always ideally placed. Besides obstacles, distance can be a bummer. Also, 802.11b and 802.11g equipment in particular can sometimes experience interference from devices that use the same band, such as microwave ovens and cordless telephones. The speeds that can be achieved are shown in the unit Mbps.

Mbps, or megabit per second in full, is the unit of data transfer rate. Mbps stands for millions (or mega) bits (not bytes) per second.

By choosing the right version, it is possible to increase the coverage area of ​​your WiFi signal. You can choose from two types. The first is the high gain round-beam antenna. Higher gain gives you a stronger signal, extending the range of your Wi-Fi network. This makes it possible to achieve a reasonable signal gain. A high gain type also has unexpected drawbacks. The radiation pattern is modified to achieve antenna gain. In practice, this means that power that is normally emitted upwards and downwards is now bundled in the horizontal plane. If a device is in the horizontal plane of the radiation, it will receive a stronger WiFi signal. For example, if a device is on the first floor, it will receive a weaker WiFi signal.

You can also opt for a directional WiFi antenna. This directs the transmission power in a specific direction. These are ideal if you want to improve the WiFi range in your garden.