Are you looking for a solution to connect HDMI devices in other rooms? With an HDMI amplifier you can extend an HDMI cable over tens of meters without this having an adverse effect on the quality. You can also choose a separate HDMI amplifier to connect two standard cables together to bridge a large distance. If you have already drawn network or coaxial cable, you can choose an HDMI amplifier that is suitable for this cable type. If you don’t want cables, choose a wireless HDMI amplifier. 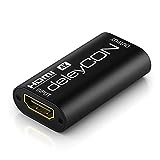 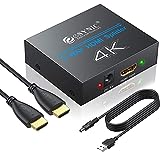 Why choose an HDMI amplifier?

An HDMI cable is a so-called passive cable. There is no electronics in the cable, just copper wire that connects the pins of one HDMI plug to the pins of the other HDMI cable. Officially, no maximum length has been defined, so a manufacturer of HDMI cables can determine how long a cable becomes as long as it meets the HDMI requirements in the HDMI certification process. In practice it turns out to be very difficult to get passive HDMI cables that are longer than 13 meters certified. The reason for this is that every meter of cable has signal attenuation.

So the longer the cable is, the higher the signal attenuation becomes. For cables longer than 13 meters, the attenuation becomes so high that the cable no longer meets the HDMI requirements. There is then no guarantee that the HDMI signal can be decoded by the receiving device. The certification requirement protects the consumer against cables that are nice and long, but where signal transmission can malfunction. For situations where you still want to bridge a longer distance, an HDMI amplifier is a good solution.

With a separate HDMI amplifier you can connect two passive HDMI cables together, so that you can easily bridge a greater distance. If you have UTP cabling between the different rooms where you want to connect HDMI equipment, you can choose a UTP HDMI amplifier. A set consists of a transmitter and a receiver that are connected to the UTP cable on both sides and both have an HDMI connection. In addition, we also supply types of HDMI amplifier that work via coaxial cable, fiber optic or wireless.

Much has changed in the audiovisual landscape since its introduction. Higher image resolutions have been developed and marketed. New systems have been released for a nicer and richer color reproduction such as HDR and Dolby Vision. In addition, new sound reproduction systems have been developed, such as Dolby Atmos. These new formats require connections with a higher bandwidth, which the original HDMI standard did not provide. Fortunately, the HDMI group took these developments into account and it was easy to upgrade the HDMI standard to new versions.

Currently, the two most recent HDMI versions are mainly used in practice: version 1.4 and version 2.0. Version 1.4 has been used for a while and supports HD image in the 1080p resolution. Version 1.4 supports digital sound from stereo to various surround sound encodings. Version 2.0 has not been out for very long and supports UHD 4K image. Version 2.0 is also the first version to support the new HDR and Dolby Vision color system. In addition, it also supports the new Dolby Atmos surround sound system. Before choosing an HDMI amplifier, check which HDMI version you need at least.

What exactly is HDMI?

HDMI stands for High Definition Multimedia Interface. The HDMI standard originated at the beginning of this century from a partnership between a number of large manufacturers of multimedia equipment. These manufacturers saw that due to the digitization of image and sound, there was a great need for a digital connection standard for audiovisual equipment that was not tied to a single brand. In the HDMI standard, some things are recorded.

First of all, the allowed signal encodings for the digital image and sound are established. In addition, the electrical connection diagram of the various HDMI connectors and the dimensions of the connectors are recorded. This has created a universal standard for interconnecting audiovisual equipment with one cable. The HDMI logo is a protected logo and should not be used just like that. To be allowed to put this logo on a product, a manufacturer must join the HDMI group and have the product certified by this group.

The Best Gaming Products to Improve your Gaming Performance
April 29, 2021